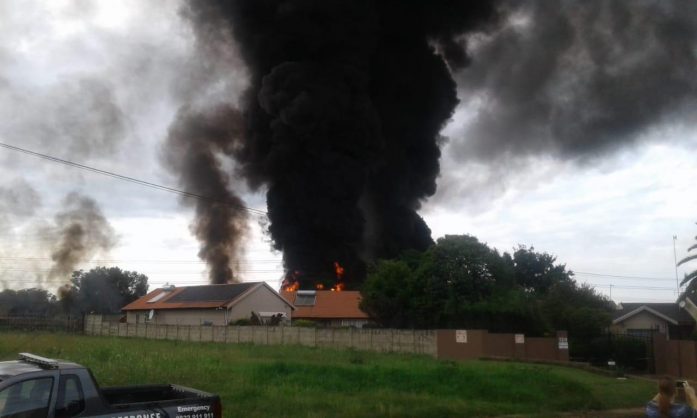 The petroleum and gas pipeline, which runs from Durban to Gauteng went, up in flames, prompting the evacuation of residents.

No injuries or fatalities have been reported and firefighters have managed to contain the blaze.

Ekurhuleni emergency service’s Eric Maloka said: “We are not sure, but it happened close to residential houses. One guy is going copy footage onto a USB so that we can check what transpired.”

The exact details surrounding the incident are unclear, but an investigation is under way.

This incident comes after the Hawks arrested two men for stealing fuel worth more than R3 million from a Transnet station in Warden, in the Free State.

It’s believed the pair had been travelling from the province to Gauteng.

Hawks spokesperson captain Lloyd Ramovha said the suspects were handcuffed after a tip-off.

“The four tankers, laden with stolen diesel and petrol, were intercepted near a farm. The pair, both Zimbabwean nationals, will appear in court to face charges of theft and damaging essential infrastructure.”

The post Theft May Have Let To Alberton Fuel Pipeline Fire appeared first on iAfrica.com.